Japanese kyusu teapot (急須), you may find a little mysterious shape.
I assume that there are a lot of basic knowledge, its history, main producing district in Japan etc are not being revealed yet.

I would like to write the topic about 'Kyusu' this time.

Also, I would like to introduce you how to use (how to make tasty tea) including the points you should know when selecting Kyusu teapot for beginners. 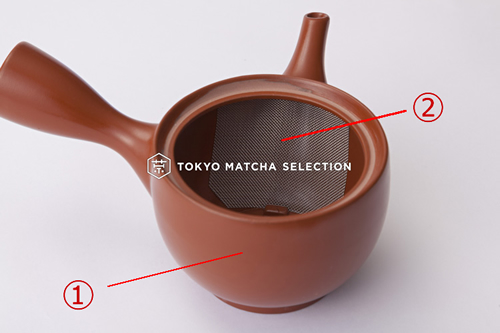 ② Mesh
There are mainly 2 types: Stainless made and Ceramic made.
In general, the one made by stainless is suitable for fine tea leaves (deep steamed green tea or powder tea etc).
There is something that you can take the mesh itself out of teapot and clean it with water too.
On the other hand, the one made by ceramic can be seen for high-end teapots a lot, such as how the hole is being opened etc are one of the chance that the craftsman can show off his technique. The mesh may vary depending on the growing district and artists. 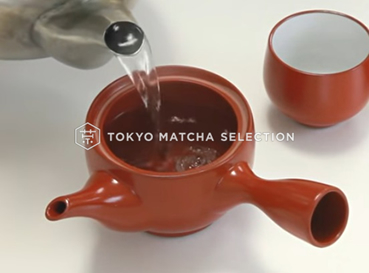 ③ Spout
A shape of spout may vary depending on tear pots. Generally speaking, we say it's easier to pour tea if the spout is narrow.

④ Handle
Teapot type may vary according to where the handles are located. (will explain about this later)

⑤ Lid
Surprisingly the lid is 'one of the important point in order to make good tea'. 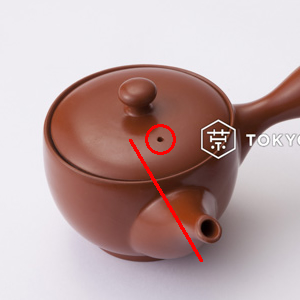 'Joint' of body and lid is important.
You would need to have no space or rattle, that is it has to be 'perfectly matched (sealed)' between them so tea won't be spilled when you pour it.
This 'joint' is also carefully made for a good teapot.

On the lid, you can see 'a hole that can take air in'. Without this hole, you cannot pour tea smoothly.
When you put the lid on it, please make sure to do like the image photo so the spout and the hole of lid would be 'straight'. Hereby it's easy for air to be rotated, hot water would be turned in a teapot nicely and tea leaves would be expanded easily (easier to steep). Also, it would be easier for you to pour tea as well.

*The location of this hole on the lid is made (designed) to be in the front (straight to the spout). Therefore it's the best place for joint too.


There are 4 categories below depending on the location of handles or with/without it. 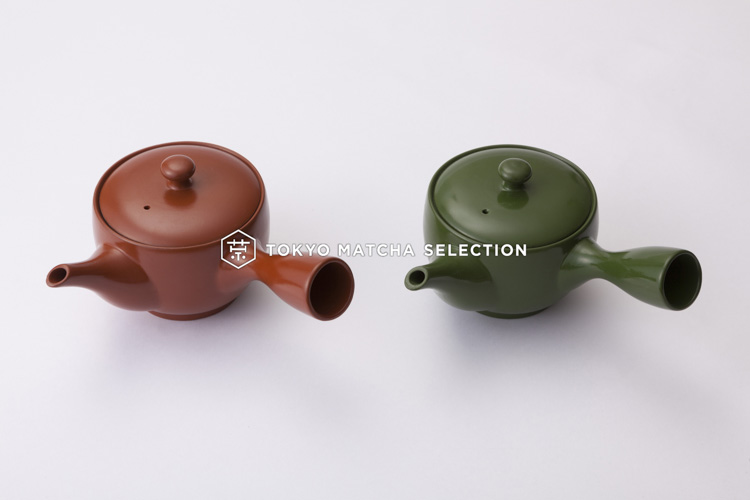 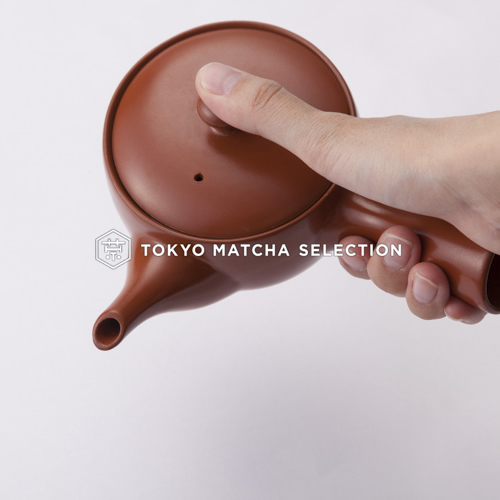 As the name shows, the handle is on the right side of the spout. The general kyusu type is this 'Yokode Kyusu teapot'. When pouring tea, you can hold the lid with one hand (thumb), it has the shape that you can drain it a lot so 'it's easy to handle with your one hand'. For someone who is left-handed, ladies or children, please make sure to use both hands.

*In a rare case, there is the kyusu teapot for left handed. If in that case, the handle would be located on the left side. (we have more right handed people in Japan than left handed.)
Since you can hold it with your one hand, due to its weight and size, there is the limit for the amount of tea that you can pour at once. (up to approx. 400ml/cc)
If the size is bigger than this, you cannot hold it with one hand, so it would be 'Uwade type' (such as Dobin and Tetsubin etc). 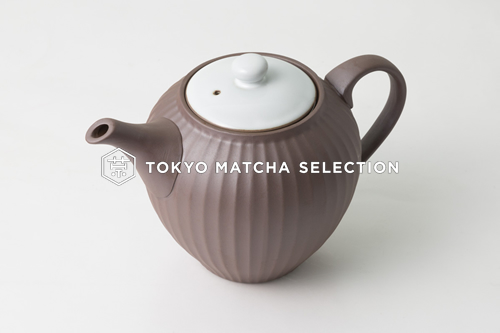 It's the type that has the handle at the back of the spout. This Ushirode type is used for teapots in China and European teapots.
A lot of them are with the bigger capacity than Yokode Kyusu, it is said that it's based on 'Chafu 茶壺' from Kososho, Giko, China. 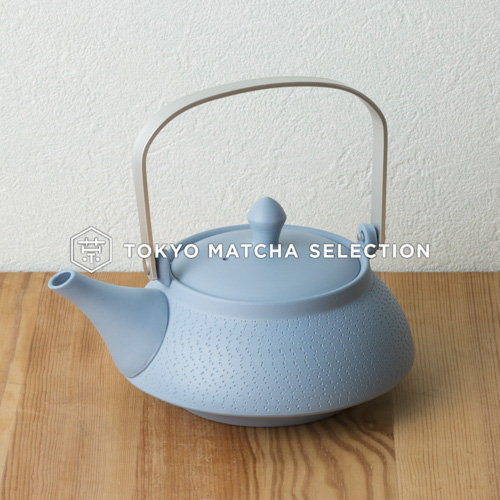 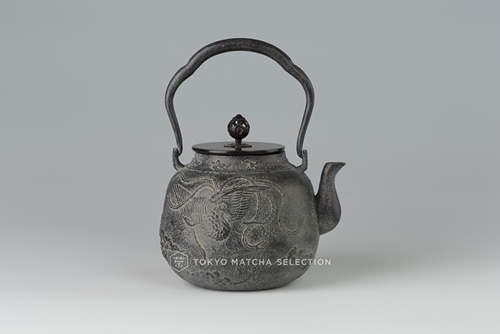 For Tetsubin (cast iron teapot / kettle), long time ago, you can (could) distinguish as shown as below; 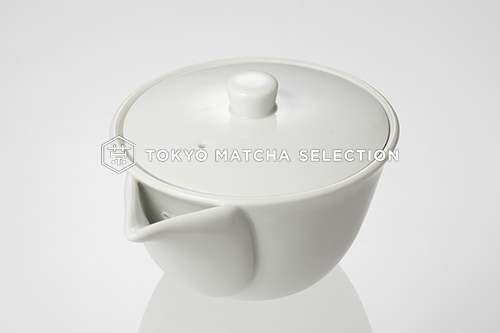 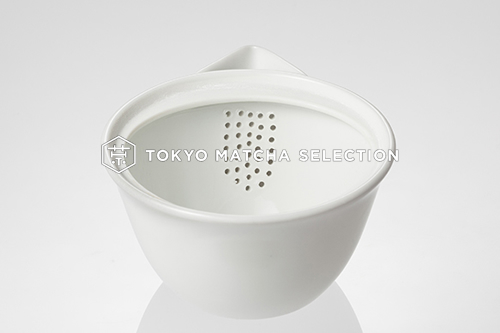 The kyusu teapot without a handle, basically it is used for a high-end tea that you would make tea with a little amount of tea leaves such as Gyokuro etc. You do not use it for black tea or Chinese tea.

Since it has no handle, you may be worried about a burn but the high-end tea like Gyokuro's steep temperature is low (50-60 degrees) so you don't need to worry about that. Also, it is suitable for traveling and outdoor activities as it has no handle. There are some various views about its origin but it's based on 'Gaiwan' from China.

In general, we say 'make' tea for Kyusu teapot and 'squeeze out' tea for Hohin.
I believe that this was came from 'enjoying the umami 旨味 of tea by making a little amount of tea with a low temperature carefully'. It's easy to deal with it but this tea utensils is rather for professional (for professional use/professional).

* The article of Gyokuro is here
Sencha and Gyokuro


As I mentioned the above, there are 4 categories in Kyusu teapot by the location of the handles.
You can choose the type that you can easily use, a kind of tea leaves (the fineness of tea leaves), capacity (a number of people and purpose of use) and design, of course.

I think that I can say in a sensible way,

3. How to use Japanese kyusu teapot

We say that kyusu was coming from China. Originally there was no ware for tea but the hot-water tank and sake bowl were used as making tea. When the tea culture came to Japan, it is expected that it’s by Kentoshi (a Japanese envoy to Tang Dynasty China around 7-9 century) but they took back not only tea but also tea set then. At the time, the made in China ‘Chachu 茶注' was perhaps the first kyusu tea pot in Japan. This is the beginning of kyusu and we have a current kyusu such as 'Tokoname-yaki (Aichi pref. Tokoname city)' 'Banko-yaki (Mie pref. Yotsukaichi city)' that Rokuro is used for production. The function-wise, the strainer and the shape have been improved to have a better and easier kyusu to use.

In Japan, there are a large number of origin of Yakimono pottery, each origins have a lot of Kamamoto (Artist). They produce ceramics with their characteristics. I would like to introduce the origin that makes teaware (kyusu tea pot and tea bowls) to you. By the way, there is some exceptions but the point in common for kyusu origin is they have the 'tea producing areas' nearby them.
i.e.) Arita-yaki/Imari-yaki = Ureshino-cha (Saga pref.)

It's a natural way of thought, to think as 'good tea set for good tea'.

Tokoname-yaki is the ceramics that is produced around mainly in Tokoname city, Aichi pref.
They say that their history has been continued from Heian era (8-9 century), one of the biggest producing area for 'teaware and tableware' and 'Manekineko'招き猫.
Shudei kyusu teapot (japanese red clay teapot) is the representative of tea set, including its function and design, it has the high reputation in and out of Japan. There are a lot of small scale of Kamamoto (Artist). They are producing high artistic quality and unique products.

Banko-yaki is the ceramics produced in and around Yotsukaichi city, Mie pref. "Mr, Nunami Rozan 沼波弄山" who was the first founder in Edo era got the signature and seal to the product as 'Bankofueki 萬古不易', they say it is the origin of that name. They use the tuff loam for raw material and started to make kyusu which is called 'Shidei 紫泥'.

Arita-yaki is the generic name of porcelain that are produced in Arita cho in Saga pref.
A glossy white porcelain, the design of dynamic and gorgeous within the delicacy are characteristic of Arita-yaki.
It has a smoothness and hardness (durability) like a clear glass. It has no absorbability so it’s suitable for tableware and teaware. A long time ago, a lot of porcelain products that were made in Arita were exported to abroad from Imari port, so Arita-yaki is also called 'Imari-yaki'.

Mino-yaki is well known as the greatest producing district of ceramics in Japan. The pottery are made in Tono region, Gifu pref. (Tajimi city, Toki city, Kani city, Toki gun). It's durable and easy to use, there are many kind of design.
"Furuta Oribe 古田織部" (Busho/Samurai Daimyo military commander / master of tea ceremony 茶人) 'Oribeyaki 織部焼 (Oribe Gonomi)’ that is famous for tea ceremony is also well-known.

*Tea set of Mino-yaki is here.

I have gathered the information about the kyusu tea pot this time.

- For fine tea leaves, a stainless mesh is more suitable.
- Surprisingly a lid is one of the point when you make a tasty tea.

- There are 4 types of kyusu tea pot by the location of handles.
- You can choose the design, a kind of tea leaves, capacity and the type that is easy to use for yourself.

- Kyusu tea pot is originally coming from China.
- Then, there have been the evolution and development that are unique to Japan.

I hope you can find 'My Kyusu tea pot' that is made just for you amount many types of kyusu tea pot.

I am sure your tea time will be more fun.

I will write again.