Teishu and The Way Of Tea - Part 2

In part 1, I introduced readers to my good friend Tetsuko-san - practitioner and teacher of the tea ceremony - and one who has been involved in the cultivation and harvesting of green tea almost her entire life.
We saw that, in her youth, Tetsuko-san prepared for married life by learning traditional skills like the tea ceremony, culinary arts, and traditional Japanese aesthetics, and it is these aesthetics that I will try to explore in this second part. 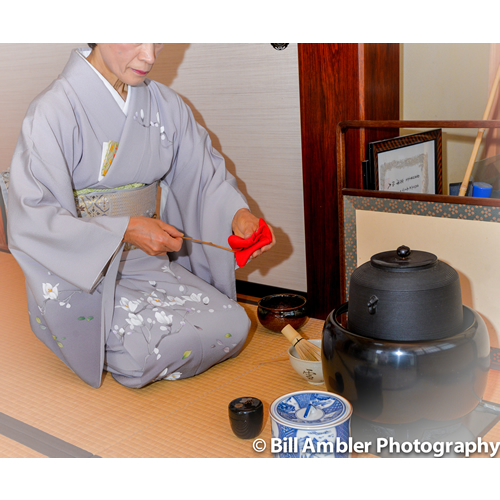 The first thing Tetsuko explained to me was that a teishu should always strive to make even a complete newcomer to the tea ceremony feel comfortable; for in spite of the formality of the performance, one must never lose sight of one's duty to be hospitable.

As I'd expected, being the guest, or kyaku (客), I was obliged to kneel and sit on my heels in the style known as seiza (正座) - a position many Westerners find difficult to maintain for long. In fact, seiza is customary in most formal contexts in Japan, where deference and discipline are seen as admirable qualities.
However, there's another kind of tea ceremony, ryūrei (立礼), where performer and guests are seated at tables.

Fortunately, the tea ceremony usually only lasts about 15 minutes, so any possible discomfort in sitting seiza style is minimised. I'm quite accustomed to sitting in this way, but because I was attempting to ask questions during her performance, Tetsuko's demonstration lasted almost 2 hours; far too long for my sciatica to tolerate seiza. Thankfully, Tetsuko turned a blind eye to my fidgeting!

To begin with, Tetsuko provided me with a small traditional sweet, or wagashi, served on a special kind of paper towel called kaishi (懐紙). This is folded and tucked into the breast of one's kimono and used for wiping fingers or the lip of the tea cup. I had to tuck mine under my camera strap, which shows how poorly prepared I was!

Tetsuko, on the other hand, was wearing a beautifully elegant kimono she'd chosen to complement the Spring season; observing the seasons and seasonal motifs is immensely important in all aspects of traditional Japanese aesthetics.
I mentioned being reminded of Zen Buddhist teachings I'd read on the concept of iki (いき), which encompasses ideals of purity, refinement, and of sensual aesthetics connected to the appreciation of nature. Testsuko smiled, and I wasn't sure if it was modesty, believing I was simply complimenting her kimono, or if I was actually misunderstanding something fundamental. Either way, it wasn't so much the design of her kimono that caught my attention, as the way she wore it, the way she moved with it, and it with her.

As I ate my wagashi, I watched as Tetsuko first ritually purified the various utensils she would use, then warmed the cup with hot water ladled from a special kind of kettle, before finally whisking the matcha powder into the characteristic frothy consistency. Her every move was practiced, precise - almost hypnotic - far and beyond simply methodical or mechanical. The most apposite English expression I could think of to describe it was 'poetry in motion.' Tetsuko asked me if I was familiar with the principles of johakyū (序破急) - I had to admit I was not, though I 'd heard the expression many years before.
In those days, I was studying performance arts at university in London and briefly worked with a theatre company that was exploring the physical disciplines of Japanese Butō (舞踏) dance. So it made sense to me when Tetsuko explained that johakyū was concerned with tempo in movement, of something which builds gradually, gets faster and then ends quickly. In this way, Johakyū is often associated with traditional Japanese arts such as theatre, martial arts, even poetry and elements of tea ceremony performance.

The tea ceremony is often described as being choreographed or balletic, though these aren't altogether very satisfactory descriptions due to the lack of drama in the performance. The performer seeks neither to challenge, nor simply delight the "audience" or guests, but to include them in an observance of various traditional ideals. However, the movements of the performer are both disciplined and mindful, and as such contain elements of iki and johakyū.

Quite apart from the more discrete movements used when preparing utensils and the tea itself, the teishu moves about the performance space in a kind of quiet, respectful shuffle. Actually, that's the effect kimono have on a woman's gait, but it does mean the performer maintains good balance and posture. What makes this movement particularly beautiful is the backwards shuffle - because the performer never turns his or her back on the guests!

What determines the particular dynamic of a performance space is the tatami flooring, where the edges of individual mats, and even the direction of the woven straw material, determines where objects are placed, where guests will be seated, and how the performer moves around.
As Tetsuko talked me through her performance, I began to discern a subtlety of meaning in the relationship between the placement of objects, both practical and decorative, her choice of kimono, the quality of her movements, and, ultimately, in my own appreciation of the thick, bitter flavour of matcha.

The main decorative elements to the tea ceremony are seasonal representations placed in a tokonoma (床の間), or alcove, which should be visible to the guests. This typically includes a decorative scroll of some kind, and an arrangement of flowers. I wrote in part 1 about Tetsuko-san's way of tea, but she is also skilled in kadō (華道) - the way of flowers. Part of the kadō tradition is ikebana (生け花) - flower arranging - but arrengements specifically made for the tea ceremony are known as chabana (茶花) - tea flowers.
Japanese flower arrangements rarely use only flowers in bloom, if at all, with buds, stems and other materials, living and dead often being preferred. In this way, kadō styles conform to many of the ideals of wabi-sabi (侘寂) - the beauty of imperfection and transience in nature - with displays often haunting representations of refined, solitary beauty.

The tea ceremony also uses a variety of ceramic styles for serving tea, and which guests are encouraged to handle and admire. Some can be very decorative, but many follow a very simple, balanced design principle known as shibusa (渋さ). Shibusa ceramics tend towards a rustic appearance, often with textures and slight imperfections that balance their inherent simplicity. Though not of itself wabi-sabi, shibusa can similarly contrast such qualities as rough and smooth, or simplicity and complexity.

As I said, my time experiencing the tea ceremony with Tetsuko went on far longer than a typical performance, but I could have happily stayed there all day discussing the Buddhist traditions and aesthetic ideals that have shaped Tetsuko-san's way of tea!