There are a lot of types for Tetsubin cast iron tea kettles (pots). 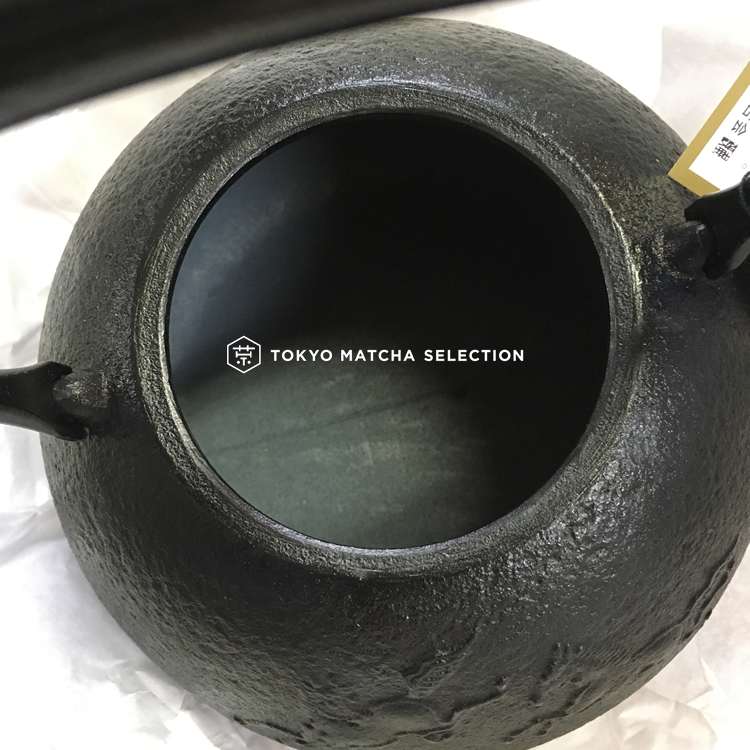 Nanbu Tetsubin iron tea kettles in Iwate is famous but Kansai area (Kyoto/Osaka/Shiga), Tohoku area (Yamagata/Iwate) and Hokuriku area (Toyama) and so on, their designs and manufacturing method would be all different.

Because Morioka was belong to the old Nanbu Domain (history of calling it as Nanbu tekki) and Mizusawa was belong to Date Domain in Sendai, so they have a different flow.

However, nowadays both of Nanbu and Mizusakwa are specified for the traditional crafts as Nanbu tekki.

2. 2 ways of production are available for Nanbu Tetsubin iron kettles as well.

It's called 'namagata', adding binding agent in sand and press with a mold of aluminum etc and create a mold.
By using this method, production can be done repeatedly and it is suitable for mass-production.
Such as a flying pan of kitchenware is this way.

The mold is made with the method of 'Yakigata'.
Yakigata can add the design by hand on the clay mold. Then, this mold is unglazed and pour the iron into it.
This mold can be reused in some cases but sometimes cannot be used.
Even if it can be used again, the iron kettle that was casted very first would have the design clearly.
By repeating the casting, the design will become blurred eventually.
Because of this if the yakigata is used several times, there would be a difference in texture of the pattern between the 1st and 4th products.


As you can see there are various history for 'Tetsubin iron kettle'.


3. How to take care of Tetsubin iron tea kettles


First of all, let's talk about how to prepare yourself for Tetsubin iron tea kettles.
It's better for you to consider that you can 'develop' (manage/grow your own preference) rather than 'maintain' in order to last a long time.
It's fun if you can nurture iron kettle !
OK, we shall talk about the main subject.

A lot of people are not sure if they have iron kettle or iron tea pot, so I would like to add some more information about it.
Please see the flowing.

Please be advised that iron kettle and iron tea port are different.

It's OK to use the same way as when you use a stainless kettle for iron tea pot. (required no maintenance)
However iron tea pot doesn't not produce any iron because the rust prevention is applied inside of it.

On the other hand, iron kettle has no rust prevention inside of it, so it requires some maintenance.
*To be exact, the process called 'Kanakedome (own rust prevention work)' is done but I won't explain about it here.


How to take care of Tetsubin iron tea kettles

1) Keep using it
2) Remove moisture completely after use

- Do not leave water in it.

- After use, you can put it over a fire to let it dry (Do not heat a kettle with no water in it.)
*It will be a cause of a fire.

- It’s also OK to remove wetness of inside of the kettle with a dryer.

3) You can keep using it to build Yuaka (water-formed deposits).

4) If you don't use it for a long time, you can sun drying once in a while.

*3) if a kettle has 'Yuaka', a hot water would be more tasty and a kettle won't become rusty.
This 'develop an iron kettle' would simply be one of the real charm of iron kettle.

Yucca (fur) is a thin film that is made by mainly calcium and mineral that are contained in water.
If you boil water with an Tetsubin iron tea kettle with water (such as well water and mineral water etc) that has full of mineral.
*The kettle will be furred up after boiling a couple times at the soonest.

However if you use water of purifier, it would take also mineral, so a kettle won’t be furred up even after a year of use.

It will have fur in a week at the soonest and a couple months at the longest.
If you can use it correctly, there will be no problem even if it has the rust.

You can keep using it properly.
I recommend you to try this with your Tetsubin iron tea kettles!

I will write you again.